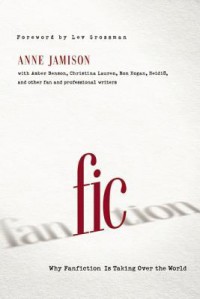 Disclaimer: I received a free copy of this ebook in exchange for an honest review.

Trigger Warning: Transphobia, I use a quote from the book where the author (Anne Jamison) misgenders transmen.

Additional Disclosure: I am mentioned in this book in the acknowledgements. I believe this was done to give the false impression that I’m on friendly terms with the author. In actuality I have a lot of issues with the author’s conduct both in gathering data for and writing of this book. The details of this dispute can be found here.

I have a lot of mixed feelings about this book that extend beyond my own personal experience with the author. It starts with the title and the assumptions it makes about the actual impact fan fiction has had on mainstream culture. Which doesn’t take such a blatant shape or scope the author tries really hard to convince us it does. All this aside the book has a poor construction. There are many really informative and fascinating individual essay that are mired in the authors ham-fisted attempts to string them together in a very specific narrative she’s chosen for them, but no matter how hard she tries they never quite fit. Leaving the reader with an scatter, often incoherent mess to sort out on their own.

From the start of the book seems to contradict the promise made by the title. While Lev Grossman’s forewords are well written and informative they’re be better suited for an introduction to fan fiction and fan culture, something this book fails to provide. Instead the book drops the reader head first into the world of fan fiction with very little help them guide the reader.

One of the biggest flaws of this book is it’s purposeful exclusion of hugely influential fandoms, Anime/manga in particular. In Jamison’s own words: “I’ve largely restricted the discussion to literary-and media-based fandoms, thereby excluding a number of vast, productive areas such as anime and sports.” This implies that anime, which includes magna a literary art form that actually predates Western comic books, is neither literature or media-based. This is not only wrong, but insulting. This kind of blatant ignorance about fan culture sets the tone for the entire book.

Fic presents a distinctly lopsided representation of fandoms. The majority of the contributors are actors, published authors, and a fan/fan fic writer with significant notoriety within their given fandoms (aka BNA/BNF, big name authors/big name fans). The fandom equivalent of the 1%, who are on first name basis with content creators or have even crossed over become published authors themselves. While these makes for great stories, they don’t represent the majority of fan fiction readers/writers or fandom in general. Not to mention that the majority of contributors (and the author herself) are educated, white, middle class women. That privilege shows in the book, specifically in how Jamison whitewashes the entire timeline and history of fan fiction.

Don’t even get me started on Jamison’s laughable attempts at trying to turn feminism into a shield to deflect legitimate criticism privileged, white female fan fiction authors like E.L. James and Cassandra Clare. A task easily done if you ignore the significant amount of women of color in fandom, but there’s no room for intersectional feminism in this book. Not surprising there’s also very little time and spotlight shone on the voices of POC in general or even the LGBTQ+ community. In fact, most of the discussion of slash/femslash (fan fiction featuring LGBTQ+ characters and themes) is mostly discussed by het, white women. That is not to say that there aren’t some POC and LGBTQ+ contributors, but their inclusion is a token effort at best. One that doesn’t outweigh the purposeful erasure of the significant influence that the LGBTQ+ community and media from non-white countries has had on ALL fandoms.

Jamison attempts to shift the blame for this lack of diversity on to marginalized people, claiming she “approached a disproportionate number of *self-identified men and people of color” and that they “declined to participate for a variety of reasons, including professional concerns and simply time.”

This is the most irresponsible non-excuse I’ve ever seen. I seriously doubt any college professor would accept a similar excuse from one of their students. [As a bisexual woman of color in fandom I can assure you there is a lot more to those "variety of reasons" than Jamison is letting on.]

*Special Note: The phrase “self-identified men” is transphobic. If some identifies as a man you call them a man. Qualifiers like this are disrespectful and damaging. Don’t ever do this.

Jamison goes to great extents to acquit herself of even the most basic responsibilities required to respectfully represent the literature of a subculture. Proclaiming she isn’t a anthropologist and saying she is examining fan fiction from an "literary perspective," which sounds good if you know nothing about critical analysis. Imagine writing a book about Victorian literature that makes absolutely not mention of how cultural attitudes of Victorian England and the Industrial Revolution influenced the genre. Likewise FAN fiction is a genre born out of FAN culture. To ignore the subculture that created this literature, or in this case selectively acknowledging only certain parts of that culture, isn’t examining it from a literary perspective at all.

Because of this lack of true understanding of the culture much of the information in the essays written by Jamison are laughably useless. There were times where I felt like the book was written but the SNL character “drunk girl you wish you hadn’t started talking to at the party.” This is not an exaggeration.

I’m far from new to the world of fandoms, I’ve been writing/reading fan fiction in multiple fandoms for decades and there were times even I struggled to understand the far fetched conclusions Jamison came to, not to mention the clumsy narratives of her own essays. Jamison’s own first hand account of discovering a BBC Sherlock meta fan fiction (terms she uses later in the essay but never fully explains) was so confusing I had to reread it a several times before I finally realized what the hell she was talking about. To get an idea of how convoluted it was, imagine having someone who has never used the internet try to describe Facebook.

Now, don’t get me wrong there are some great essays in here (that aren't written by Jamison), but they are buried deeply under Jamison’s agenda of selling herself as an expert in a field she does not, in fact, have a claim to academically. She is a professor with a degree in Medieval literature, who has been teaching classes on Twilight and Buffy the Vampire Slayer fan fiction for a handful of years. Her lack of knowledge shows in how little she mentions fan culture studies and the distinct absence of any contributions from established scholars in this field of study. Even though this book covers long established fandoms that have been studied for decades (Buffy the Vampire Slayer, Xena, Supernatural, etc).

Like Columbus, Jamison walks into fan culture and plants a flag ignoring the hard work and existing presence of academia in favor of selling herself as the sole voice of fan fiction and fandom. This claim rings false, despite her significant social network presence in the Twilight fandom, consider her completely ignorance or at least lack of acknowledgement of the existence of acafans.

All this aside the book is poorly put together, scattered and rushed in its conclusions. The lack of comprehensive knowledge of the many fandoms being study, the willful erasure of the contributions made by people of color, non-Western fandoms, and the LGBTQ+ community to fan culture and specifically the fan fiction being produced in internet based fandoms today, will leave knowledgable readers infuriated and new comers woefully misinformed.

Though there are some really wonderful essays in this book I cannot in good conscious recommend it to anyone.

I would instead suggest reading The Fan Fiction Studies Reader by Karen Hellekson and Kristina Busse.

(I’ll add some more titles as I work through the pile of fandom studies books I have on my to-be-read list).